Palawan is also home to amazing places such as El Nido, Coron Island, and Honda Bay. But, perhaps most impressive of all is the underground river that is part of the Puerto Princesa Subterranean River National Park.

Although the official name is the Puerto Princesa Subterranean River, it is actually located 2 hours away near Sabang beach.

Palawan is a must-visit in my eyes if you go backpacking in the Philippines, and this is one place you cannot leave Palawan without seeing.

The Puerto Princesa Subterranean River is located on the island of Palawan. Despite being named after the capital city of Palawan, the river is actually 80km (50 miles) north of the city. It is recognised as a UNESCO World Heritage Site and has been part of the Puerto Princesa National Park since 1992.

The river itself is more than 24km (15 miles) long and also contains a section of the Cabayugan river. Scientists discovered a second floor to the subterranean river in 2010, thus there are small waterfalls inside.

It’s possible that there are further underground chambers, but due to oxygen deprivation, they are unlikely to be explored!

Getting to the Subterranean river

Most tours depart from Puerto Princesa. If you are staying at a hotel, then they should be able to book them for you.

When we arrived at the airport, there were a number of traders offering deals to the river, but we found it was cheaper booking through our hotel.

If you are staying in Sabang, you will be able to get a deal from one of the local traders there.

Once you have booked your tour, you just have to be in the hotel lobby at 7 in the morning and you’re on your way! The journey to Sabang takes about 2/3 hours, although there are a few stops along the way.

Our bus made a few stops for food and we also stopped at a place called Elephant rock. Although it didn’t exactly look like an elephant, it was an interesting place nonetheless!

Why you should visit the Puerto Princesa Subterranean River

The underground river in Palawan is simply something that you need to experiences. There are many great reasons to visit Palawan, but this is up there with the best of them! This is truly a unique site that you have to visit while travelling in the Philippines!

The natural beauty of the area is stunning as well. The beach at Sabang and the sheer limestone cliffs make for a spectacular setting. The trip across the water to the Subterranean River is almost worth the fee alone!

The Puerto Princesa Subterranean River was recently named as one of the new 7 natural wonders of the world. It’s in good company along with amazing places such as Halong Bay and Table Mountain! If that doesn’t convince you to visit the underground river in Palawan, then I don’t know what would!

Perhaps one downside to the tour is that you have to rely on the light provided by the tour to see anything inside. Unsurprisingly, it is quite dark inside, so seeing things can be difficult without the help of light. This also impacts on your ability to take photos, even those with flash do not turn out too well.

This is immaterial to me, as the experience is still great regardless of the lack of visibility. This is truly a unique thing to do in the Philippines, as there are not many underground rivers in the world, that offer such cheap tours!

The tour itself may be short, but the day as a whole is fantastic. The Puerto Princesa Subterranean River is definitely one of the best places to visit in Palawan. If you love beautiful natural landscapes and places teeming with wildlife, then you want to include this on your Philippines backpacking itinerary. 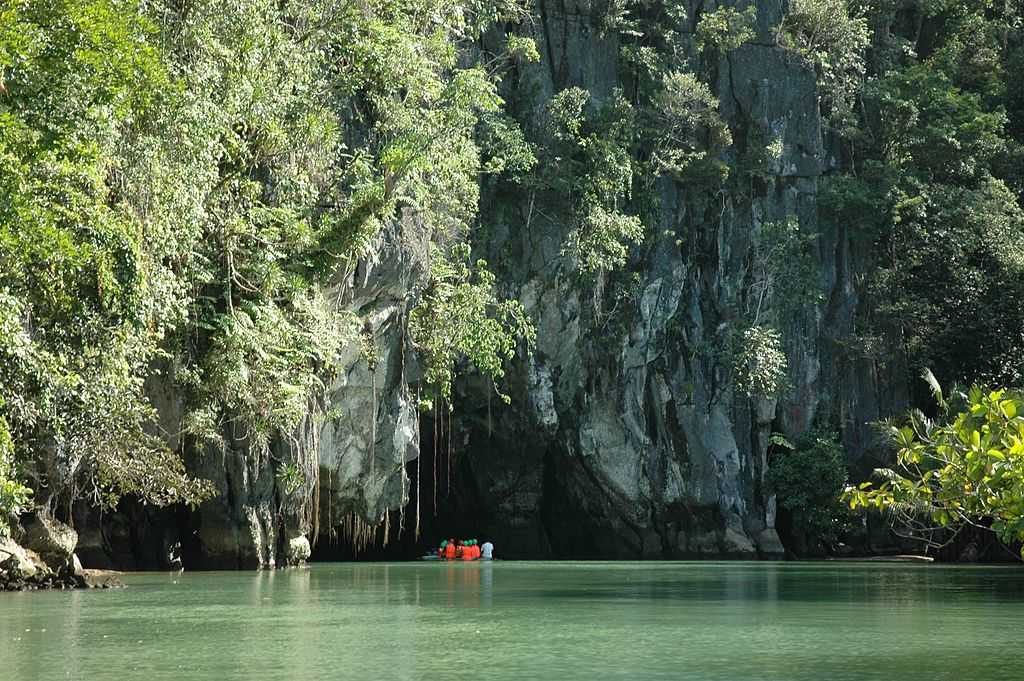 Depending on what time your tour is scheduled to take place, you could end up spending more time in Sabang than you would have planned on! This is actually a great opportunity to explore the area, which is beautiful and do a few extra activities.

We arrived in Sabang at about midday and told we would be going to the subterranean river after lunch. This meant we would have the opportunity to do some extra activities beforehand if we wanted to!

The activity was zip-lining, which was great fun! The trip up to the platform itself was just as good as the zip line itself! You take a jeep to the beginning of the track up to the platform. As there were quite a few of us, me and my friend stood on the bumper at the rear of the jeep!

The walk up to the zip line was fantastic! You snake your way through the forest before you reach the platform. There is ample opportunity for sightseeing during this walk and the scenery doesn’t disappoint. As you can see from the above photo it is spectacular.

The zip line is great fun and definitely worth doing if you love an adrenaline rush. Plus, you get a great view on the way down! Once you’ve finished it’s back to the beach at Sabang to eat lunch before travelling to the Puerto Princesa Subterranean River.

The tour itself takes about 30/45 mins, though you will also spend that time waiting to be called for your turn. By the time you get back to Sabang after the two-hour drive back to Puerto Princesa, you’ll have spent about 10 hours on the trip. However, it is definitely worth it!

To get to the subterranean river you take a Bangka and head across the water to the location of the river. The journey is great as you get to admire the beautiful limestone escarpments that make up the coastline.

One of the first things I noticed when we got off the boat was how green and teeming with wildlife the place was. There was a giant lizard roaming around the toilet block and huge trees and plants everywhere. I wasn’t expecting there to be lizards on the island, so this was an added bonus. It was interesting seeing the lizard up close, even if it didn’t do much!

Lizards were not the only wildlife in the area, there were lots of macaques by the entrance to the river itself. There are signs all around the island telling you not to feed the macaques, after a few minutes it becomes apparent why. The macaques are very cheeky and have become dependent on food from tourists.

It’s best not to encourage this behaviour as it will only get worse over time. To avoid losing any valuable items ensure they’re hidden away in your bags. Otherwise, you might not see them again!

It is some experience as you enter the river and light gave way to darkness. Especially as you only have a lamp to shine some light inside the cave. If you are at the front then you may be asked to hold the lamp and shine it on certain features in the river.

There are a lot of interesting features once inside, including rock formations that resemble people and things. The Philippines is a very religious country, most of these are related to figures in Christianity.

Perhaps the most striking for me was a huge cave that seemed to tower above us for ages. It felt like being in the bat cave the ceiling was high and the fact that the lamp had to steadily creep up to find the top only added to the spectacle!

How much does it cost to visit the Puerto Princesa Subterranean River?

As good as the underground river in Palawan is, you wouldn’t want to pay over the odds for it. Thankfully, the price of the tour is very reasonable at around 1500PHP, which includes the tour, food, permit and transport to and from your hotel!

You can pay more if you want to go further into the subterranean river, though I’m not sure it is worth the extra cost. If you choose to do the zipline across Sabang beach that will cost you 550PHP, which is a bit steep. However, it’s great fun and kills a bit of time, so I think it’s worth doing!

I think Palawan is the best island to visit in the Philippines and the Puerto Princesa Subterranean River is just one of the reasons why! The natural beauty here is stunning and you get the chance to do something you may only experience once in your lifetime. I’ve certainly never been in an underground river before or since!

Once you have experienced the Puerto Princesa Subterranean River, it’s easy to see why it’s considered one of the new seven wonders of the world.

It is incredible to witness the power that nature has, even if it is acted over millions of years. Experiencing this makes you realise that we are fortunate to live on such an amazing planet, with beautiful scenery!