12 Best Beaches in South Australia You Have To Visit

While you’ll find some of the best beaches in South Australia in Adelaide, there are plenty of others all around the state.

The state might not be the most well-visited part of the country but South Australia beaches are some of the best you’ll find in Oz. Almonta Beach and Hardwicke Bay are as good as any you’ll find on the East Coast.

Glenelg and Henley Beach are the two main beaches in Adelaide, and they’re perfect if you’re looking for a quick day at the beach. While some of the best beaches in SA can be found on the Fleurieu Peninsula, with Maslin Beach is one of the best.

You can also discover shipwrecks at Ethel Wreck Beach and lots of wildlife at Dolphin Bay and Memory Cove.

If you’re looking for somewhere to go on a hot summer’s day, then these South Australian beaches are the places you have to check out!

Glenelg is a beachside suburb in Adelaide that’s only a direct tram away from the city centre.

When I was in Adelaide, this was the beach I visited the most. It’s easy to get to and a really nice place to spend the day. You can play volleyball if you wish, relax on the beach and take a walk down the jetty too.

If you’re feeling a bit adventurous, then you can jump off the jetty into the water below. Glenelg is one of the South Australian beaches you’re most likely to visit due to its proximity to the centre of Adelaide.

With so many cafes, restaurants and bars close by too, there’s plenty to do here besides enjoying the beach as well!

Henley Beach is another beach that’s not far from the centre of Adelaide, although it takes longer to get there from the centre than Glenelg. Spending the day at Henley is one of the best things to do in Adelaide and shouldn’t be missed!

Once you get there, you’ll be greeted by a huge beach and an expanse of golden sand. Even on busy days, you won’t have trouble trying to find space as there’s plenty of it at Henley.

Again, simply relaxing at the beach, enjoying the water or walking along the promenade are some of the things you can do while you’re there! 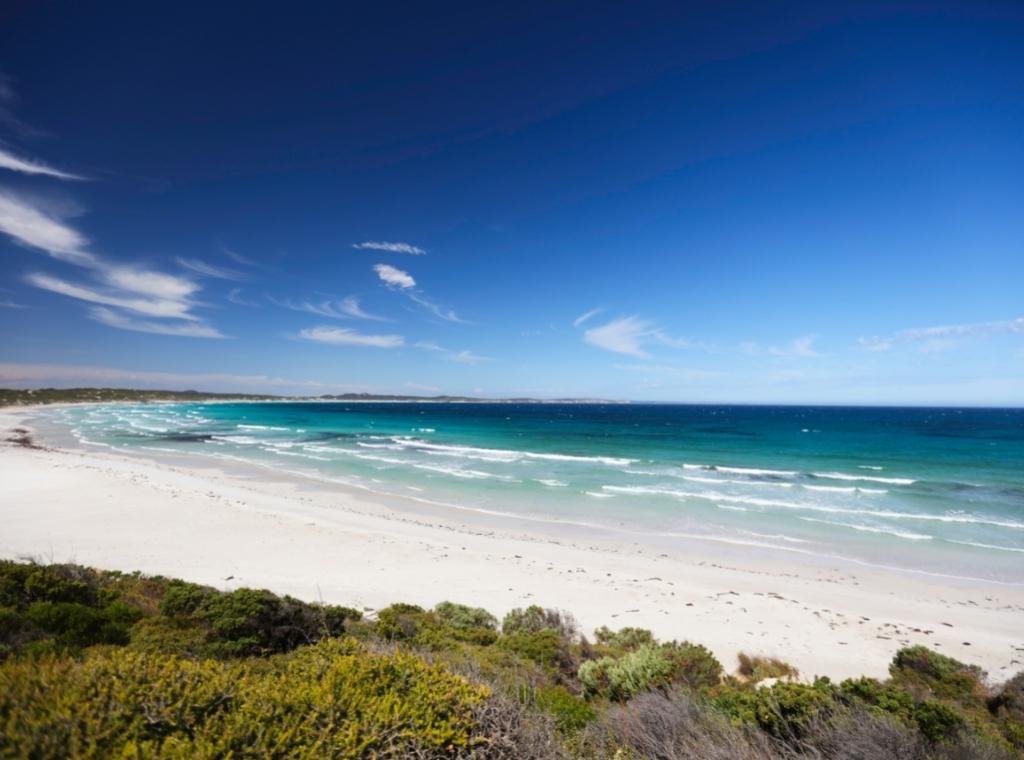 Vivonne Bay in Kangaroo island is without a doubt, one of the best beaches in South Australia.

Kangaroo island is a beautiful place and Vivonne Bay is a stunning place you have to check out. The bay is a curved sandy beach that stretches along the coast for 5 kilometres (3.1 mi).

The crystal clear waters give the bay an almost tropical feel and it’s amazing to walk along the jetty and jump off into them on a warm summer’s day. If you’re lucky you might see some dolphins and seals, as they are often spotted in the area.

Swimming in the waters, as well as fishing and having a picnic at the beach, are all recommended. Remember to consult our beach packing list before you go!

The name of this beach is a reason to visit alone, and yes, the name does mean that dolphins are regularly spotted in the waters.

Dolphin Bay is one of the South Australia beaches you have to check out for this reason alone. It’s located on the southern tip of the Yorke Peninsula which is over 100 kilometres from the centre of Adelaide.

The beach is found in the Dhilba Guuranda-Innes National Park, which is one of the lesser-known national parks in Australia and makes for a scenic spot. The 800-metre-long beach is beautiful with golden sand and turquoise waters.

The cliffs that surround the bay are worth exploring, while you can swim in the water here with relative safety due to the enclosed nature of the bay. You might also spot a few local kangaroos sunbathing on the beach with you if you’re lucky! 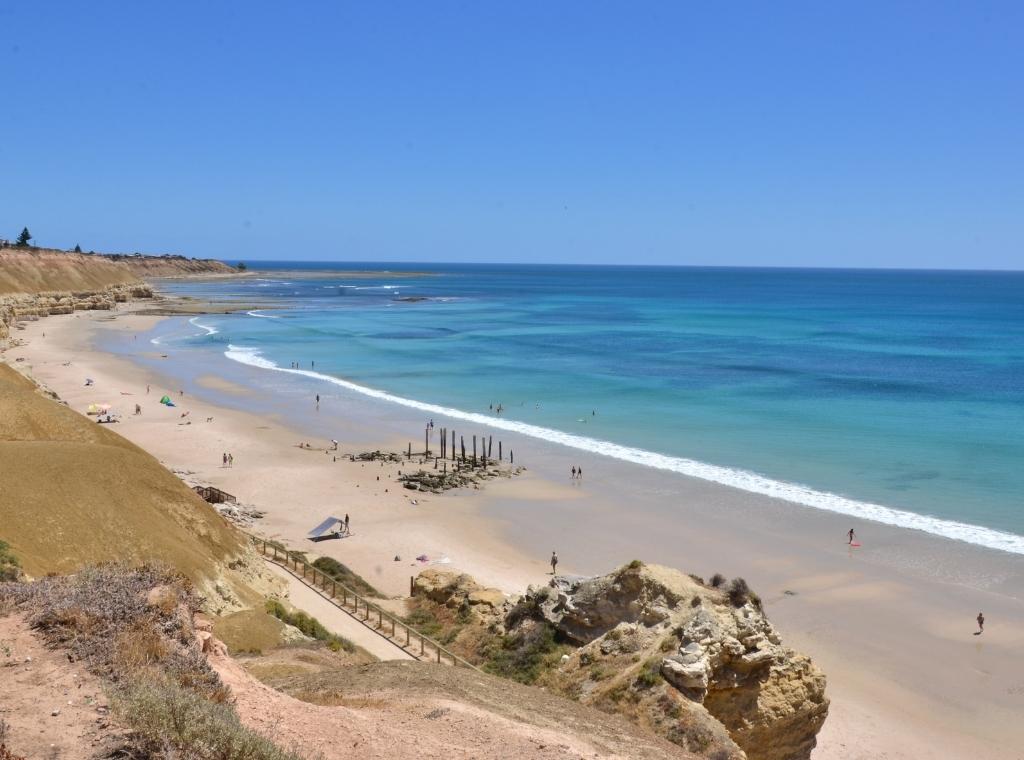 If you’re looking for a beach to visit that’s not too far from Adelaide, then Port Willunga is the place.

Located 35 km from the centre of Adelaide, it’s an ideal place to go for the day and one of the most photographed beaches in South Australia.

It’s a scenic beach with towering cliffs making for a spectacular backdrop. The golden sand and clear waters are perfect for a relaxing day, while you can check out the ruins of the old jetty too.

Port Willunga is also great for long walks along the sand and has a romantic feel to it that’s perfect for trips with your significant other. 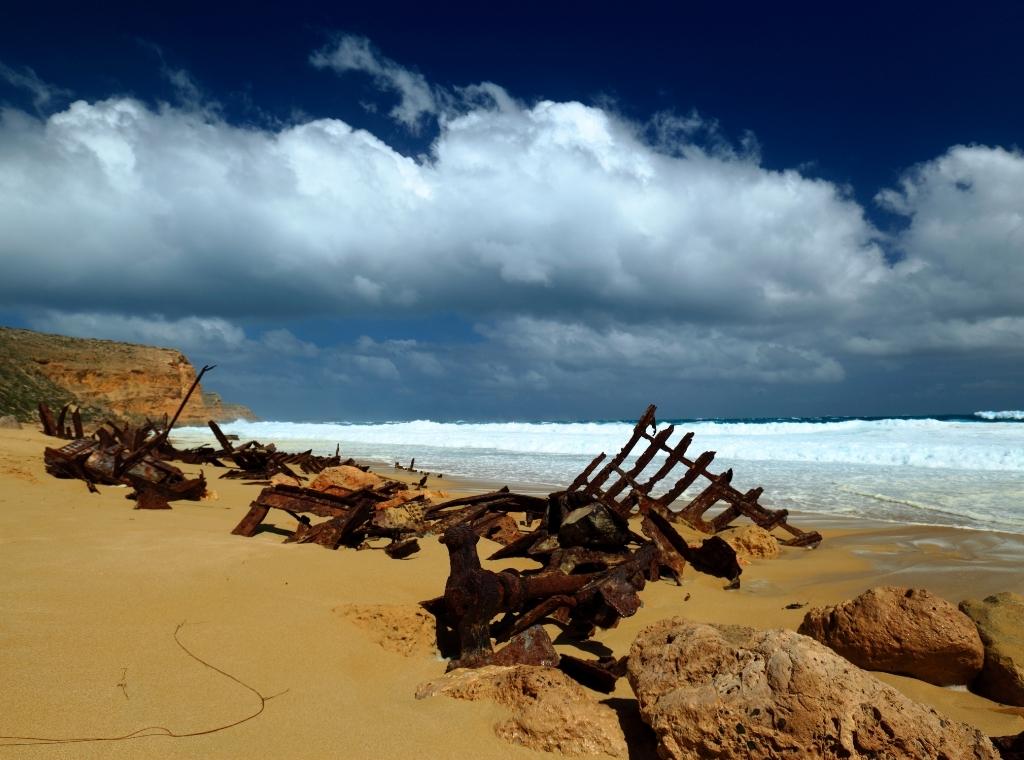 Another of the beaches located on the Yorke Peninsula, Ethel Wreck Beach is slightly different to the others on this list and the clue is in the name.

The beach is home to the shipwreck of the Ethel, which was a 711-tonne, three-masted iron ship that ran aground in 1904 during a storm after a long voyage from South Africa.

The years have taken their toll on the ship, with the hull collapsing in the 1980s, but there’s still a lot left to see. The large pieces of the ship still stand out amongst the sand, while the boiler of The Ferret, another ship that suffered a rough fate on the beach lies about 50 metres away.

Ethel Wreck Beach might not be one you’ll spend the day relaxing at but the chance to see an impressive wreck is one you can’t pass up! 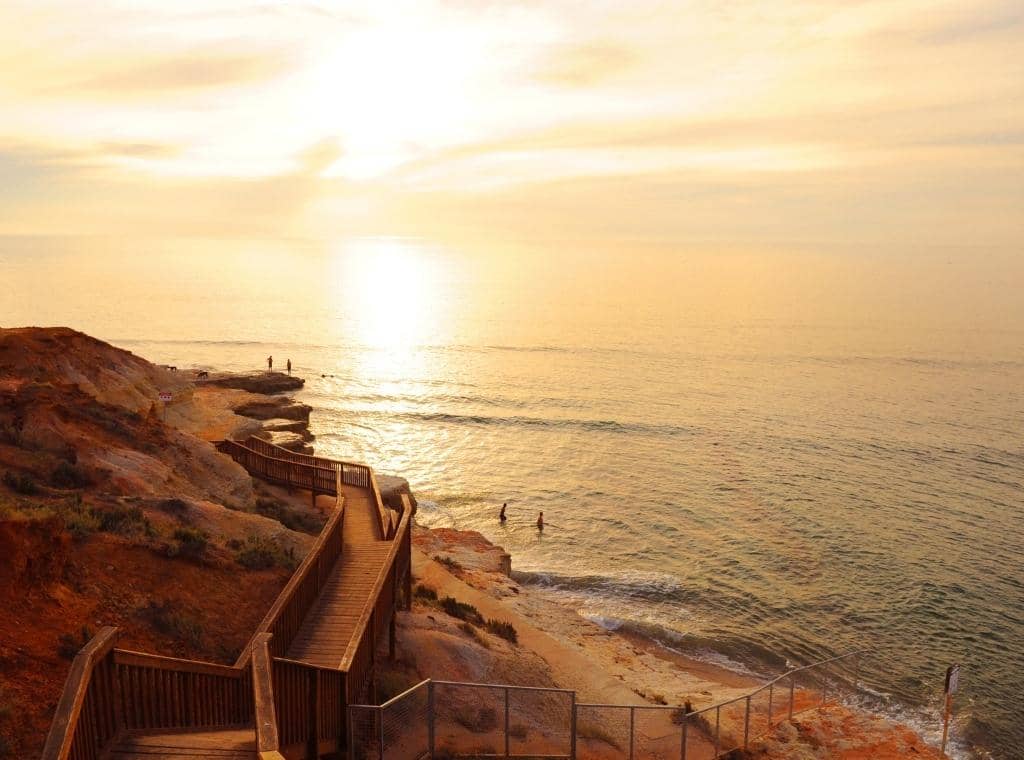 Like Port Willunga, Port Noarlunga is a short trip from Adelaide and a perfect place to spend the day.

You can also go kayaking, diving and fishing at Port Noarlunga which makes it an excellent place to visit with your family if you want a day outside of Adelaide.

The sandstone cliffs and long jetty are two more landmarks that Port Noarlunga beautiful location and a must-visit while you’re in the state! 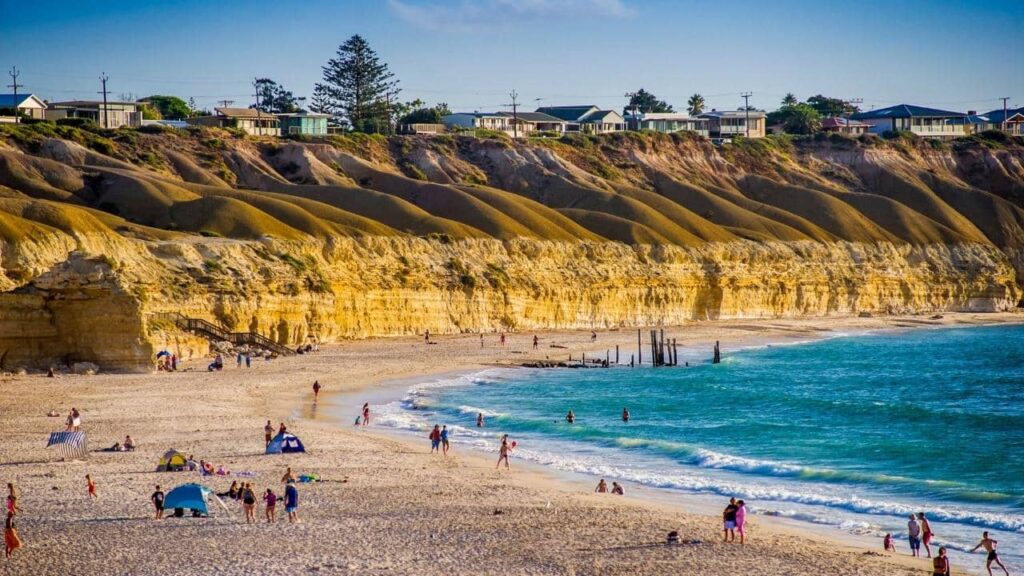 Maslin Beach, which is known locally as ‘Maslins’, is one of the most beautiful beaches in South Australia and is only a short distance from Adelaide.

As you approach the beach, the cliffs and golden sand come into focus and make for a dramatic view. There’s a reason Maslin Beach is considered to be one of the nicest in the state.

There’s plenty of space to relax on the beach, go swimming or have a picnic on the high cliffs near Blanche Point.

Maslins also has the distinction of being the location of Australia’s first nudist beach. This is confined to the southern end of the beach, so if you don’t fancy getting all your kit off, avoid that part of the beach!

Located on the gorgeous Eyre Peninsula, Memory Cove is one of the SA beaches you have to check out.

Memory Cobe is a stunning beach and your visit here will certainly be committed to your memory such is the beauty of the scenery!

It’s about an hour away from Port Lincoln and is a brilliant place to spend the day. You can relax at the beach and take in your surroundings, swim in the clear waters and explore the surrounding area.

You might also be joined by some of the local wildlife, as kangaroos are known to regularly visit the beach! 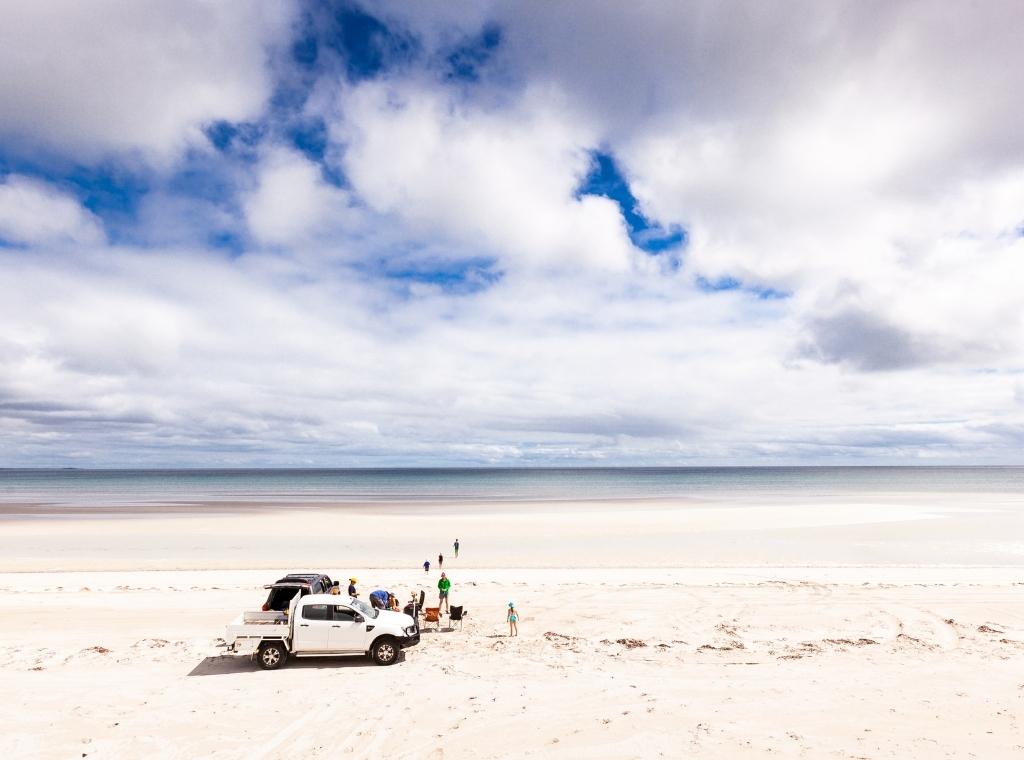 Hardwicke Bay might not be a place that’s overly familiar but the beach here on the Yorke Peninsula is one of the best beaches in Australia, never mind South Australia.

What makes Hardwicke Bay such a great place to visit is the relative solitude. This isn’t a busy beach, it’s one of the quietest, which means you’re likely to have most of the beach to yourself depending on when you visit.

Hardwicke Bay is located on the Spencer Gulf side of the Yorke Peninsula, which is a bit of a drive from Adelaide, Still, it makes for one of the best day trips from Adelaide and spending a weekend in the area is a good idea too.

While there might not be lots to do in the area, Hardwicke Bay is still one of the best beach towns in South Australia. Just relaxing at the beach and enjoying the crystal clear water is more than enough!

If you’re looking to visit one of the remotest beaches in South Australia, then the Merrdayerrah Sandpatch is the place to go.

It’s the westernmost beach in the state and is a must-stop if you’re doing an Adelaide to Perth road trip.

This isn’t a beach for swimming due to the strong currents and rip, but if you’re a surfer then you’ll love the sandpatch. The waves here can be spectacular and a few hours in the surf is a great way to take a break from a long drive.

The backdrop of the Nullarbor Plain and Bunda cliffs make for a spectacular setting, which are best seen while walking along the beach and its sand dunes. 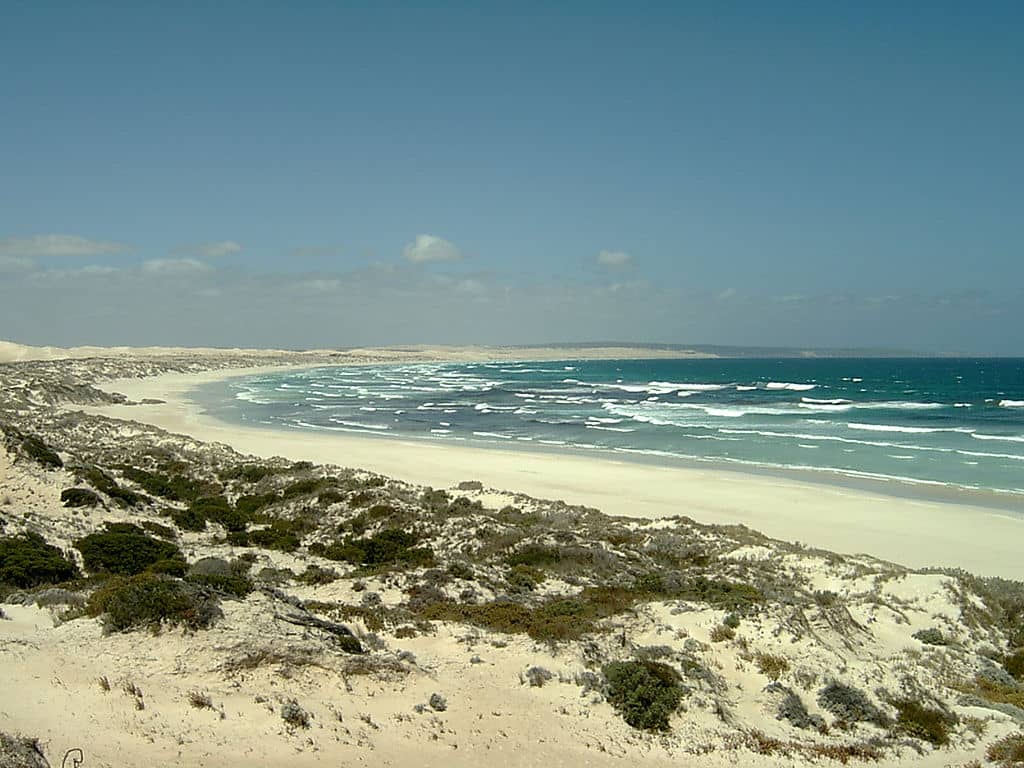 One of the most beautiful South Australian beaches is, without a doubt, Almonta Beach.

When you first set your eyes upon the beach in Coffin Bay on the Eyre Peninsula, it’s hard to believe it’s real, such is its beauty.

The white sand and clear waters are just spectacular and are one of the reasons why South Australia is such an underrated destination. The beaches and the scenery in the state are out of this world.

As the beach is in Coffin Bay National Park, you might see some wildlife while you’re at the beach. Kangaroos, emus and lizards are all known to frequent the beach, while you may also spot some dolphins out to sea if you’re lucky!