Choosing the best beaches in New Zealand is tough, let me tell you why: as there is a lot to choose from. A lot of people think of the spectacular scenery when New Zealand is mentioned, but the beaches are of a high calibre as well!

Firstly, there is a lot to choose from, so narrowing the list down is difficult! Secondly, this list is obviously arbitrary. It is my choices, so not everyone will agree with me. What I think everyone can agree on is that New Zealand beaches are great and one of the best reasons to visit New Zealand!

Most people go travelling to New Zealand for the spectacular scenery, and that should include beaches in New Zealand too! Some of these beaches are the best I have been to, which is saying something as I was backpacking in Australia before I visited New Zealand!

This is by no means an exhaustive list, just a few of the beaches in New Zealand that I enjoyed while I was in the country!

7 of the best beaches in New Zealand

There are lots of things to do at Cathedral Cove. You can kayak there from Whitianga in the North and Hahei in the south. The area around Cathedral Cove is great for snorkelling and there is plenty of marine life around!

In keeping with New Zealand’s reputation for stunning scenery, Cathedral Cove doesn’t disappoint. It’s definitely a beach you have to visit in New Zealand! 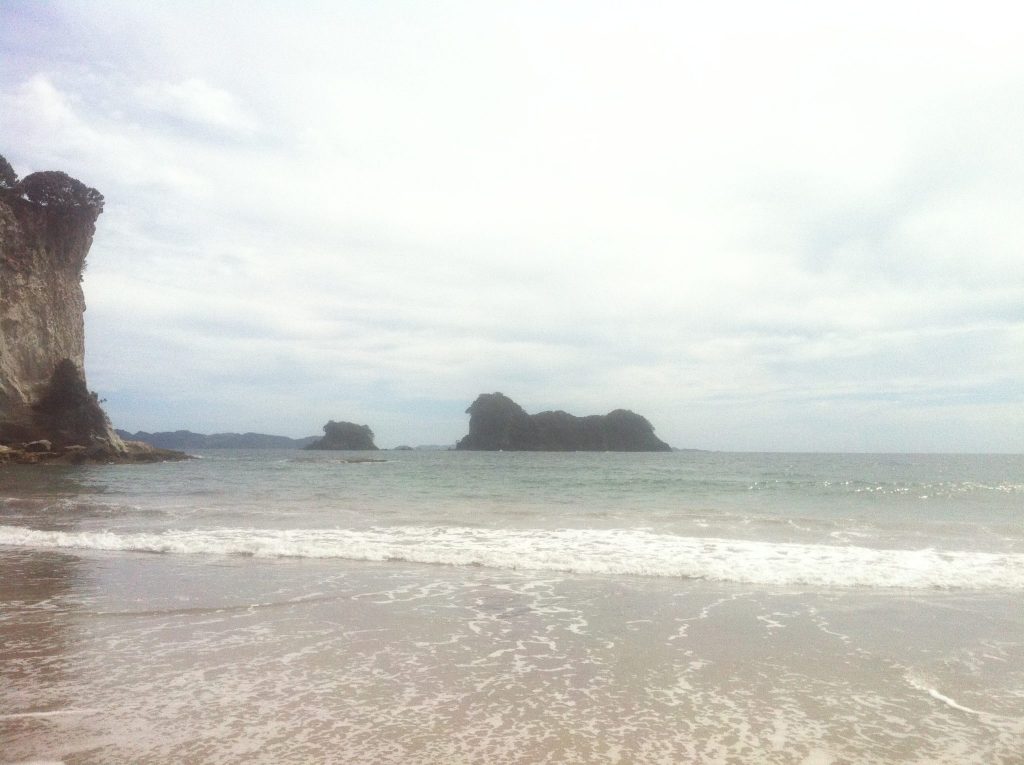 If you are travelling to Christchurch, Taylor’s Mistake beach near the town of Sumner is one you have to visit!

It’s a windy and uphill road to get here and you will almost certainly need a car to do so (though you could cycle or get a bus close by and walk the remainder), but you won’t regret it!

If you are into surfing there is a decent swell here most of the time. Compared to nearby New Brighton beach, you will probably have it all to yourself, as it’s a lot less busy.

Godley Head, an old battery station during the Second World War, is located close to the beach. There is a lot of scope for exploring the surrounds up there and seeing the old schoolhouses and battery installations!

With the lovely town of Sumner close by, it is best to make a day of a visit here. If you are travelling to the South Island, Taylor’s Mistake is a must-visit. 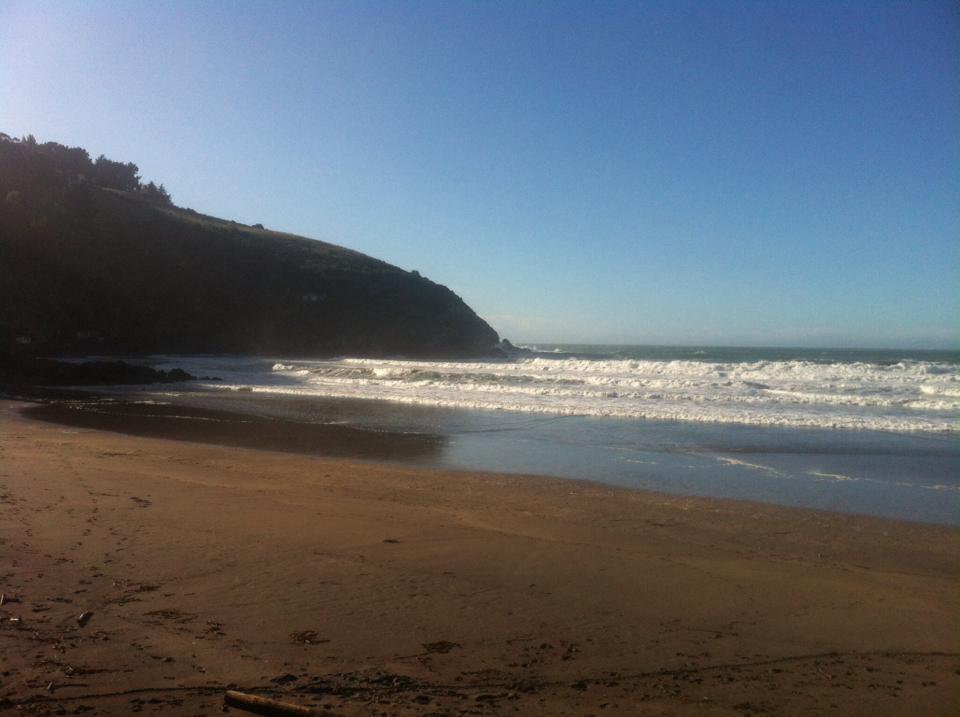 Mission Bay is one of the best beaches in Auckland and one of the closest to the city centre! It is a fair walk from the centre of the city, so it’s best to either get a bus or drive there unless you enjoy walking that is!

There are great views of Rangitoto Island from Mission Bay, which make for great photos. This alone makes it one of the best beaches in New Zealand, as you get to appreciate the beauty that is everywhere in New Zealand.

The beach is a bit small and can get busy, especially in the summer. However, this is the only downside, as it’s a great place to spend the day lazing in the sun! I brought a book and read it for a few hours in the sun, and listened to some music as well. There aren’t many better places to relax in Auckland!

The promenade is home to a number of great cafes, my advice would be to spend as much time as possible here. You might as well make at least half a day of it and enjoy what the area has to offer. 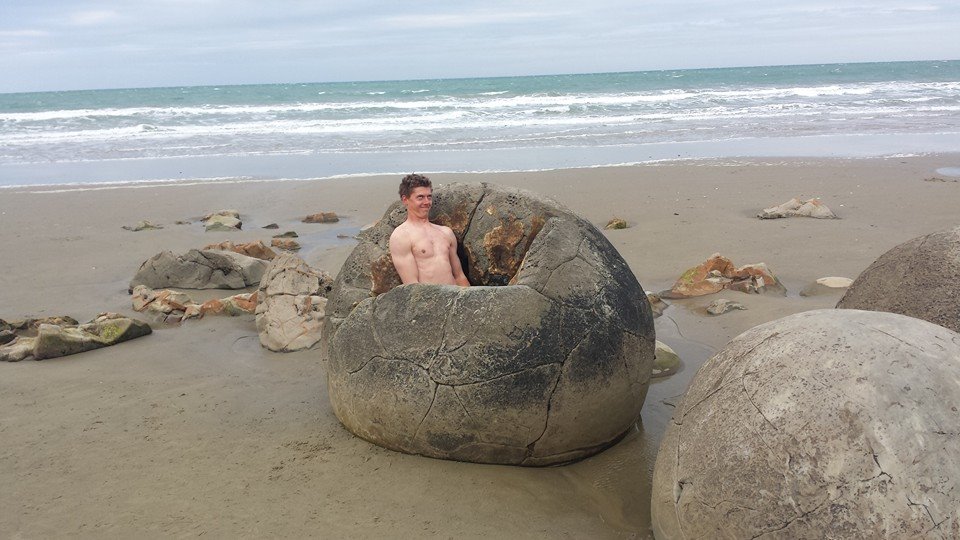 Moeraki beach is a little different to the other beaches on this list. Let me tell you why:

The beach is home to the Moeraki boulders, that are dotted about the beach as if they have been planted there. They’re actually a result of millions of years of erosion and are a strange sight, to say the least.

Moeraki beach is one of the more unusual places to visit in New Zealand. It does feel like these boulders have no place on the beach. It’s one of those naturally occurring phenomena that have to be seen to be believed!

They also make for a great photo opportunity, as you can see below!

Technically, not a beach, as you might have guessed by the name, it is a spit. However, given how spectacular this 26km stretch of sand is, I had to include it!

Farewell Spit is part of Golden Bay, which is at the top of the Northwest of the South Island near Nelson. The whole area is spectacular in itself, but there is nothing quite like seeing the expanse of sand here.

To get to the ‘beach’, you have to walk across the massive dunes that have been created on the spit. It can feel like you are crossing a desert at times. It’s worth it for the views and to see the length of the beach. There is a lot to see and explore, that you could spend the majority of the day here!

Golden Bay should definitely be on your list when you are in New Zealand, but it would be a crime not to visit Farewell Spit while you are there, to see the power of nature!

Ocean Beach is definitely one of the best beaches in New Zealand and certainly one of the most spectacular! Here’s why:

This beach at Mount Maunganui in the Bay of Plenty is picture-postcard perfect. Golden sand, blue water, and lush surroundings make it a must-visit!

There is plentiful surf here and with dozens of cafes dotted around the area, there is a lot to do. That includes climbing up the ‘Mount’, which as you can see, offers spectacular views of the surrounding area.

The Mount is home to a huge beach party on New Year’s Eve and is certainly worth a visit if you are in the area at the time, it is a great location for a New Years Eve party and the fireworks aren’t bad either!

As the name suggests this is a beach where the water is hot, but that doesn’t tell the full story. It’s not the water from the sea that’s hot, it’s the water underneath the sand!

This beach on the Coromandel Peninsula is unique in this sense. There aren’t many places in the world where you can dig a hole in the sand and have your own hot tub! This is why I feel it is one of the best beaches in New Zealand!

I remember coming here and seeing everyone walking around with their shovels. At first, I was confused as to the reason why everyone had shovels, once I got to the beach it made sense.

This beach is a must-visit just for the novelty of the hot water, and for its beauty. The Coromandel Peninsula has some of the best scenery in New Zealand and what better way to enjoy it than relaxing in your own custom made ‘hot tub’ on the beach!?